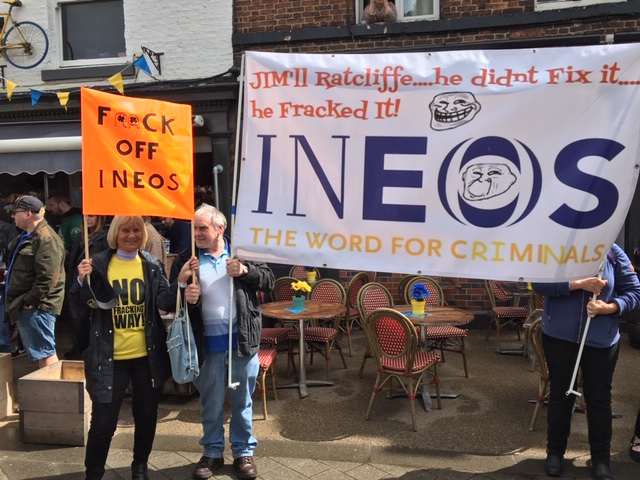 Yes, it’s a shocking headline isn’t it? But members of CADAF were among the protestors who turned out to greet Team INEOS on the opening day of the Tour de Yorkshire. Here are some photos of the occasion, with grateful thanks to Brenda & Kim.

Kim said: “We did have a good day despite the rain, was nice to chat to fellow fracking haters from around Yorkshire .
“We saw the Frack free stall and we were asked if we could give some masks out, which wasn’t easy as a lot of people were not interested, I ended up putting them in a pub that already had anti fracking leaflets in! Not everyone was welcoming as I was asked to move by people who didn’t want a banner behind them, I just told them I had the right to be there, like they did and I wasn’t doing anything wrong. Other people, thought I was there to upset the sport and I just explained that was not what I wanted to do. I didn’t agree with the shouting at Chris Froome and the other riders, it is not their fault and I think the people who did shout, don’t do anything for our image at all, they just alienate people.
“Brenda and I had people stop us in the station and ask what we were doing, and patted us on the back in support, which was great.”

CADAF wishes to thank Brenda & Kim for going along to support the cause, well done both of you!

This site uses Akismet to reduce spam. Learn how your comment data is processed.